Gardening, Rocks and lots of Work & Some Fun…

Posted on September 27, 2009 by rossandkathy

Five years ago we started a small, 3 x 5 foot garden in order to stick a few rhubarb plants in the ground. We also attempted to grow tomatoes on our patio in pots. The rhubarb did well and the deer loved the tomatoes. Last year the first frost came while the tomatoes were still green so we had to ripen them in the house.

Over the years the garden has grown bigger and bigger and bigger; it has actually grown faster than the vegetables in it and has now reached a size of about 20 feet by 30 feet. We also have a raspberry patch in a separate area of the yard.

This year was our most successful. We have had a fair crop of snowpeas, beans, tomatoes, tomatillos, squash, turnips, lettuce, cucumbers, radishes, carrots and onions. We have not had to buy lettuce since July and we eat a salad almost every night. Having a garden has saved us some on the monthly food bill and we are convinced that next year’s garden will be even more productive. I think we can shave about 40% from our weekly grocery bill during the harvest season. In the above list I did not mention that we also have asparagus and strawberries. This was planted last year, but will not be ready to harvest until next year. This is not a crop for people who are into instant gratification or those who move often.

Gardening in our area can be somewhat of a challenge since we have a very short growing season. It is not really safe to plant until the second week in June (our 1st summer in SD we had four inches of snow on June the 4th) and our first frost usually comes by mid September. This means we have around a ninety day growing season so when we find seeds that need 85 days we move on to something else unless they are frost hardy. Another problem is that our nights are generally colder than most heat loving-vegetables like. We also have extremely rocky ground. You can dig down several inches and then find a bucket of rocks for every few square feet of ground. The other problem is the deer. We don’t have the small white tail deer that many other areas have. We have large (really large), fence jumping plant munching mule deer. 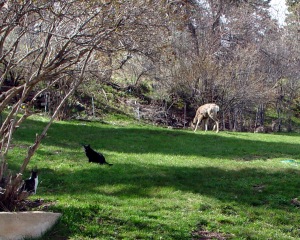 As for the deer, we have fenced the garden with a four foot high fence topped by several rows of rope with cloth strips that wave in the wind. This has the effect of a seven foot fence. A neighbor has offered to loan me his paintball gun to use on the deer. He shots them with frozen paintballs so they are not splattered, but it has to sting. These are town deer and have no fear of humans and have been known to attack large dogs. Because of the fence I have been known to refer to the garden as the “Fortress”. 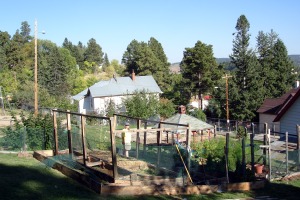 The rocky ground has been a constant backache causing persistent problems that we may have found an answer for. Kathy found a book on gardening that describes a method of building up layers of peat moss, straw, dirt, manure, compost and almost anything else one wants to throw in. These layers are piled on top of a thick layer of newspapers which keeps the grass from growing. This means no more digging. The latest addition to the garden uses this method in slightly raised beds that are about four feet across and separated by paths so we can get to both sides of the planting beds. We are converting the rest of the garden to this idea as fast as possible.

Next year’s crops will be about the same as this years except that we will plant more of everything and stagger the planting as much as we can to stretch out the harvest time. We will also plant the deer resistant crops like rhubarb, garlic and onions outside of the fenced area to give us more room for other stuff inside the fortress. We are lucky to have a pantry off our kitchen that stays about forty degrees or less in the winter and so it makes a good cold room for storing onions, garlic and other root type vegetables that we can grow.

Kathy is much more of a gardener than I am (I’m grateful for that) so I end up being the construction guy and take care of raised bed, path and fence building while she does the planing, planting and plant tending.

As I mentioned we have a short growing season so below is a picture of our future. Last year our yard turned white around mid-September and stayed that way until mid-May. 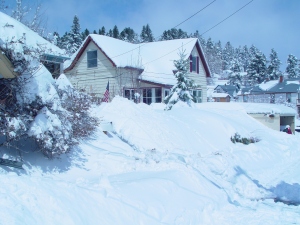 1 Response to Gardening, Rocks and lots of Work & Some Fun…