Getting back to normal…

After being gone for 5 1/2 months, I’m not sure we have time to get back to normal before we leave again in April. I know, it seems like a long time, but it will pass quickly and we are slow people.

The first part of normal, for here in the hills this time of year, happened on Friday morning when we saw a few flakes of that white stuff in the air. There is a possibility that we may see more of it tonight and in the morning, but we will see.

We have been busy this past week unpacking the trailer a little at a time so we don’t end up with an overwhelming pile of stuff on the porch that looks too big to tackle. We have removed the window air conditioners here at the house and stored them for the winter. We are also finding our winter gear and getting it out. I say finding because I don’t always remember where it was stashed.

Another part of returning to normal is Buddy, our toddler dog, and getting him back in to his South Dakota routine. He started to get excited before we reached the house and I’m sure he knew he was almost home. Once in the house and after a quick check of all the rooms he was at the back door with tennis ball clamped in his teeth for a session of let’s play ball and anoint his kingdom. He also settled right back in to the routine of sleeping in his pen at night–something he had not had to do while living in the”Box” because the space was too small to leave the crate together during the day and it was way too much trouble to take it apart and put it together every day. I have to admit that after a summer of sleeping with us Iwas surprised at the fact that he went right back to his old habits with no whining. And here I thought he thought sleeping with us was a big deal.

We also had some yard work to catch up on when we got home, however it was not as much as I thought it would be: a little weed whacking along the fence line and some of the shrubs and that was about it. Kathy did plant some mums so we could have a little fall color. The other yard project involved the part of our fence that surrounds the patio. Buddy discovered last winter that once the snow piled up he could escape by walking over the patio wall. That escape plan will not work this winter since the fence now extends four feet above the wall. He also discovered that he could step over the five foot fence in the backyard, but we fixed that by having me shovel the fence line (one hundred and fifty feet of it). I’m really happy that we could out-smart the dog.

Kathy has returned to her weekly volunteer work at our local food bank, we have returned to our church and will both soon return to the community boards we serve on. Kathy to the Library Endowment Board and for me the Historic Preservation Commission.

We have reconnected with our friends here and really miss the new friends we made this summer and are already looking forward to our return to Vermont in April 2012.

The last part of returning to normal is my part-time winter job at Terry Peak Ski Resort, aka “The Hill”. I will start there in the morning as we begin to get the Hill ready for the season. 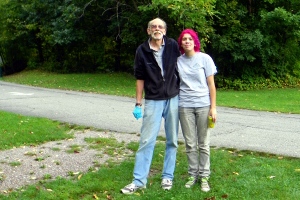 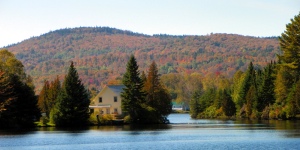