The Winter Witch arrived bearing gifts on Friday and stayed through most of Saturday. The gifts were 9 inches of snow, stingy amount for us, wind and some sub-zero cold.

When we moved here in 2003 I was a big fan of snow. Maybe because in Maryland we only had it once or twice a year as opposed to here were we have had at least one year that had snow every month from September to June. I still like snow, just not as much as I did. Actually since I work part-time at our local ski resort snow equals job security so I have to like it… at least a little bit. My like for snow as also probably declined due to eight years of snow shoveling, eight more years of age and Buddy the Toddler Dog. Why the dog you ask, well he has learned he can step over the fence once the snow piles up so before it piles up to much I have to shovel around one hundred and seventy feet of fence line so he will stay in the yard. He also, as you readers know, is fond of chasing tennis balls and neither snow or sub-zero temps are a deterrent to this game. Of course the game requires a human to toss the balls and his human of choice for this game is me. 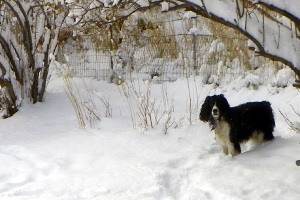