Of Things That Go Bump In The Night…and Day

Posted on January 2, 2014 by rossandkathy

Several days before Christmas we starting hearing strange booms and bumps that occurred both day and night. One night I thought it was the cat jumping down from the kitchen counter, but realized he was curled up next to me and the dog was in bed also. Our bed gets crowded sometimes, but that’s a story for a different post.

Our first thought was that it was caused by snow sliding off the roof, but a quick look at the deck eliminated that idea. We worried that it could be the snow load on the roof, but we only had a few inches of snow so that was not it. We considered trees might be popping due to the extreme cold, but that was not it either. On several occasions it was severe enough that we could feel a vibration through the floor of the house.

We got an answer by watching the local news one evening when they talked about people in a wide area experiencing the same thing and explained it was due to cryoseisms which are small quakes (Frost Quakes) caused by the rapid freezing of water in the soil which causes it to fracture.

It has been cold here since before Christmas. We have been as low as – 22 and have had several days that did not get far above 0. (I could have stayed in South Dakota and had the same weather). The picture below is from early this morning. 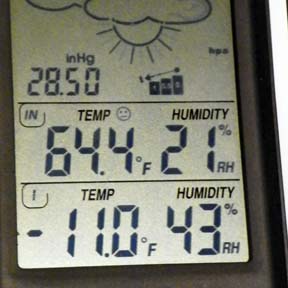 End of our drive after the ice storm. 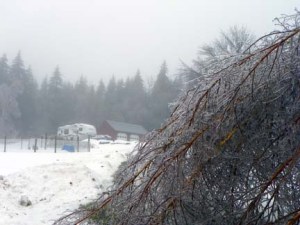 Trees at end of drive 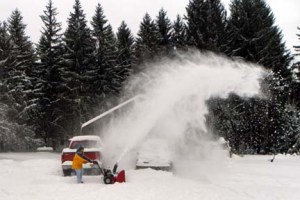 Someone better pick that ball up and toss it for me…

Buddy is a fan of the snow and the cold does not seem to slow him down at all, however it can be hard on the “Ball Captain” (me).

A view of our barn

After last winter we were thinking we might be due for a mild one, but that does not appear to be the case. So for all of you who posted about being in shorts and tee shirts while we were having an ice storm and running the house from our generator…may you experience winter before spring arrives…